Converting Hawaii Electric Light Company to a cooperative would lead to a reduction in the cost of power according to an analysis performed by Hawaii Island Energy Cooperative.

Assuming a purchase price of $760 million, the putative value as assessed by London Economics International in its recent report on Hawaii utility ownership models, we have concluded that there would be an initial net reduction of 2.7 percent from the cooperative model’s refund of patronage equity with greater savings likely over time if HELCO were to become a coop.

The drop in electric rates would be possible due to lower operating expenses compared to the current investor-owned utility (IOU) model, federal and state tax income tax exempt status, lower cost of capital and the elimination of the intrinsic tension between ratepayers and shareholders that exists under the IOU structure.  Additionally, coops are eligible to receive disaster support from the Federal Emergency Management Agency while the Hawaiian Electric companies are not.

Consider just one example of savings under the coop model for Hawaii Island: in 2017 HELCO was charged $21.3 million by its parent company HECO for intercompany charges.  Under a coop, about $15 million of that total would be saved.

Traditionally IOUs have been incentivized to spend more money, in the form of capital expenditures, in order to make money.  By contrast, cooperatives are driven to do more with less given that ratepayers are also coop members and there’s very strong incentive to keep costs down.

In fact, our cost of capital comparison clearly shows that any capital expenditures in the future produce a smaller rate increase as a cooperative compared to an IOU.  So the difference would get bigger over time, thereby increasing the cooperative rate advantage.

Local case in point: Kauai Island Utility Cooperative has not sought a base rate increase in over 10 years while HELCO has gone to the Hawaii Public Utilities Commission three times to increase rates since 2009.

Conclusion: switching to the coop model on the Big Island would bring electric costs down for the island’s residents.

What the Hawaii residential utility customer using 500 kilowatt-hours per month would have seen over the past year depending on their island of residence. 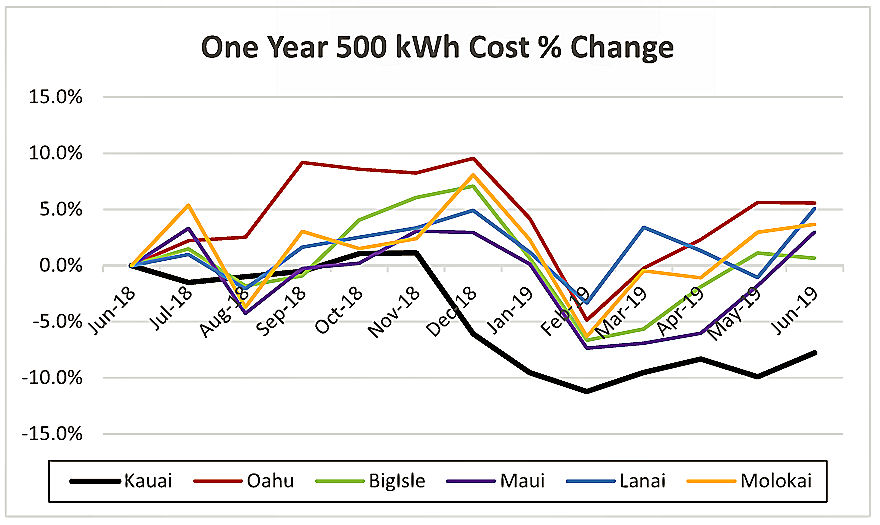 "We are very pleased and appreciative of the support of both the legislature and governor for HIEC's efforts to bring the coop model to the Big Island," noted HIEC director Marco Mangelsdorf. "Having the backing of the people’s body and the state's chief executive is truly humbling," added Mangelsdorf

“Receiving this official approval is fantastic news,” stated Marco Mangelsdorf, HIEC director and spokesperson. “This sets the stage for HIEC to be an operating non-profit utility serving the Big Island. This is particularly important as both HELCO and HECO roll out new electric rate increases. Cost control and efficiency are core to a cooperative, not shareholder profits. As the holidays approach we at HIEC remain committed to helping Hawaii Island residents and pledge that, given the opportunity, we would do all we can to keep rates as low as possible.”

This is a singularly important time for Hawaii Island residents in light of the Hawaii Public Utilities Commission July 2016 decision to not approve the acquisition of Hawaiian Electric Industries and its subsidiaries HECO, HELCO and MECO. When combined with the imminent submission by the Hawaiian Electric Companies of their Power Supply Improvement Plans and pending rate increases, the consideration of the cooperative ownership structure is timely, relevant and presents an opportunity to make critically important decisions about how Hawaii Island will meet our state’s clean energy objectives in the most cost effective way possible.

“We first sought to get a seat at the table in early 2015 as the docket on the HEI-NextEra was opened,” noted HIEC president Richard Ha. “Those of us who founded HIEC were convinced that the tumblers had fallen into place for us to do all that we could to try and replicate the success that Kauai Island Utility Cooperative has been achieving on the Garden Island. We got our seat and are excited about the future.”

"We are very pleased and appreciative of the support of both the legislature and governor for HIEC's efforts to bring the coop model to the Big Island," noted HIEC director Marco Mangelsdorf. "Having the backing of the people’s body and the state's chief executive is truly humbling," added Mangelsdorf

The HIEC plan, based on a new analysis of the island’s existing resources and estimates of potential new solar, wind and energy storage resources, presents a less expensive and cleaner alternative to previous plans.

"We are very excited to be able to propose a compelling, practical and doable plan that would accelerate our island’s clean energy transformation in a way that would yield significant benefits for the more than 83,000 electric customers here," noted HIEC director and spokesperson Marco Mangelsdorf.

According to Mangelsdorf, "By building on the successes achieved by Kauai Island Utility Cooperative to integrate high levels of cost-effective solar PV into the grid while adding just the right amount of storage to ensure system stability and reliability, HIEC would be better able to ensure a lower-cost, more balanced power supply portfolio."

Through its analysis HIEC has developed a plan that includes:

In the Hawaiian Electric Industries-NextEra Energy merger proceedings now being held by the Hawaii Public Utilities Commission, NextEra has asserted that the primary question the Commission should ask itself is whether Hawaiian Electric ratepayers and the State of Hawaii would be better off with or without the sale going through.

HIEC has argued that the Commission should consider the merits of the cooperative ownership model for Hawaii Island.

Noted HIEC president Richard Ha, "Credibility, purpose and a focus on how to best serve and benefit the island’s 195,000 residents is what this cooperative is all about. HIEC’s alternative power generation plan provides an important basis to establish that a cooperative does what its members want, not what is in the best interest of shareholders. We are committed to a path to the island’s renewable energy future that will get us faster and cheaper to where we all want to go—an economy based on more affordable electricity and an environment that’s cared for."

Hilo, Hawaii – 12/10/15
Conversion of the electric utility on Hawaii Island to a nonprofit cooperative is expected to deliver greater savings than those promised with the proposed sale of the Hawaiian Electric companies to NextEra Energy of Juno Beach, Florida.

By lowering the cost of capital, eliminating federal income taxes and the profit margin built into Hawaii Electric Light Company’s rates, the financial analysis found that Big Island customers could save as much as $113 million on the existing HELCO rate base and up to $234 million including investments to modernize the grid over a four-year period. This compares to $60 million in savings estimated by NEE for customers on all five islands served by HE over a four-year period.

In proceedings now being held on the proposed sale by the HPUC, NEE has asserted that the primary question the Commission should ask itself is whether the customers of HE and the State of Hawaii are better off with or without the sale going through.

HIEC has argued that the Commission should also consider the merits of the cooperative ownership model for Hawaii Island.

In addition, HIEC makes the case that a cooperative has the ability to accelerate the island’s clean energy transformation faster and with more focus than a mainland-based investor-owned utility.

"For Hawaii Island, the reality is that the 190,000+ residents of the island would be better served by a cooperative. Beyond the lower cost of capital and the lower electric bills that follow, the benefits of a coop include local, democratic ownership and control of one of the most important infrastructures on the island", said Marco Mangelsdorf, HIEC director and spokesperson.

Other advantages of the cooperative business model include:

Noted HIEC president Richard Ha, "HIEC is able to focus on only our Hawaii Island and its unique needs, desires and resources. The single island focus and urgency created by a customer-elected board of directors to set the strategy is KIUC’s greatest strength and the reason they have been so successful in the transformation of their island’s utility system."

Hilo, Hawaii – 7/20/15
One of the co-founders of the Hawaii Island Energy Cooperative (HIEC) urged state regulators to give serious consideration to the cooperative business model as an alternative to selling the island’s electric utility to NextEra Energy.

"HIEC believes that there is a once-in-many-lifetimes opportunity to achieve something truly transformational on Hawaii Island. The energy cooperative model versus investor-owned model is a unique and appropriate discussion worth having at this critical juncture," HIEC co-founder and spokesman Marco Mangelsdorf wrote in testimony submitted to the Hawaii Public Utilities Commission today.

HIEC, which was founded earlier this year to explore the possibility of cooperative utility ownership, is an intervenor in the Public Utilities Commission proceeding reviewing the proposed sale of Hawaiian Electric Co. and its utilities, including Hawaii Electric Light Co. (HELCO), to NextEra Energy of Juno Beach, Fla.

Mangelsdorf stressed that HIEC does not oppose the sale to NextEra and acknowledged that HEI has said HELCO is not separately for sale. But he urged the PUC to consider the benefits of not-for-profit cooperative ownership as part of its decision-making process.

Among the cooperative benefits Mangelsdorf described are:

Noted HIEC president Richard Ha, "HIEC is able to focus on only our Hawaii Island and its unique needs, desires and resources. The single island focus and urgency created by a customer-elected board of directors to set the strategy is KIUC’s greatest strength and the reason they have been so successful in the transformation of their island’s utility system."

HIEC is a non-profit cooperative association formed by community and business leaders on Hawaii Island to explore the potential merits of a community-based, cooperative ownership structure for electric utility service on the island, including such potential benefits as: In seeking to intervene in the PUC Docket, HIEC is not taking a position in favor of or opposition to the proposed merger at this time. Rather, HIEC seeks to bring to the proceedings its specific focus on the energy needs of Hawaii Island and its unique perspective on potential cooperative ownership structures.

“We seek to participate in the discussion of the unique perspective of the residents of our island, and if appropriate, explore an option that would make for a fundamental change in the landscape of energy production and consumption on Hawaii Island,” explained HIEC director and spokesman Marco Mangelsdorf. “Being able to have more direct control over Hawaii Island’s present and future energy profile would provide us with an extraordinary opportunity to showcase what can be done on our island on many different and innovative levels,” said Mangelsdorf.